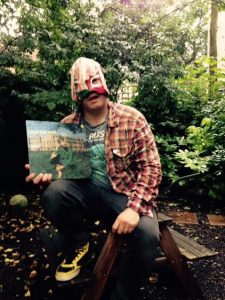 I inherited my late brother’s record collection soon after his death at the end of 1982. It was a burden as much as a privilege, crates and crates of obscure vinyl and unspooled bootleg tapes, rotting in a shack out in the woods of Chilliwack, British Columbia, alongside shelves of filthy bongs and blankets full of burnholes.

People blamed me for his death. They said I never should have lain down naked in the woods there at night to surprise him, with bacon plastered all over my ass. They said I should have known the bears would come.

I don’t necessarily feel it’s my fault. Who could have known bears liked bacon that much? I thought they liked honey, and marmalade, but then I never did pay attention in class. Too busy getting’ my teen-punk rocks off to butt-kickin’ Canadian hardcore like DOA and the Dayglow Abortions.

Nevertheless, the assumption of my guilt has manifested itself in two ways. Firstly, I’ve worn a mask made of bacon in public now for three decades, and it became a trademark of my stand-up comedy act all over Western Canada. And secondly, I am the curator of my late brother’s record collector legacy, a duty which appears to grow ever more expansive and, dare I say it, tedious.

Once it would have been reasonable to assume that all the flakey shit he listened to would soon be consigned to the trash can of history, but you reckoned without youtube, reissue culture, and the blogosphere, and now all the fucked-up weirdness you might think you’d seen the back of is floating to the surface like poisoned salmon after a leak downriver at the chemical plant.

Take this weird-ass shit. Les Rallizes Dénudés –France Demo Tapes (Bamboo BAMCD7017). My brother had this 1977 recording by this barely-existent Japanese band on a reel to reel tape, but I think it was called something else back then. The sleeve notes of Bamboo’s probably unauthorized reissue place the recording sometime in the late ‘80s, but if that’s the case how did my brother have it back in the ‘70s. And have it he did, in a carboard case upon which he’d drawn a doodle of a blank-eyed Godzilla blasting a fat Canadian black bomber.

First sighted as a radical theatre troupe in 1962, Les Rallizes Dénudés’ unique selling point is that in their 34 year existence they never made an official recording. Everything we have is bootlegs, though that hasn’t stopped fuckhead psueds like Lady GaGa and the comedian and plagiarist Stewart Lee, posing in Dénudés t-shirts for publicity shots, like the bandwagon-riding asswipes they are.

Takashi Mizutani’s mysterious outfit seemed to arrive fully formed, all the available evidence revealing them as sounding like the tripped-out closing minutes of every other psyche-punk outfits’ extended jams, but just pushed out to infinity, with all the actual song trappings removed.

France Demo Tapes is no exception. If it’s the live recording the sleeve claims, there’s no apparent audience noise, just three tracks over 47 minutes of ear-burning out-there gloop. On the 22 minute The Last One, ponderous pulverizing rhythms throb beneath squalls of feedback and mumble-moaned vocals.

The 18 minute An Awful Eternity is surely named with a sense of self-knowing humour. Drums skitter softly away in the far distance, while Mizuntani lays down a mantric chant over intermittent scrapes of guitar noise. It’s great to hear this stuff again, and it speaks to me now in way it never did when my brother locked me in the cabin as a kid and forced me to listen to it at full volume.

Sweeden’s Kvartetten Som Sprängde (The Quartet That Blew Up), certainly display what muso-squares would describe as ‘chops’, and I expect the flashy jazz-inflected trio (yes, I know) would have been more than a little sickened by Les Rallizes Dénudés’ ill-disciplined noise, but maybe the meatball-munchers could have benefited for the introduction of a little chaos on their lone ’73 album, Kattvals (Tone Arm TA003).

Just when the all-instrumental combo’s drums and trippy guitar interplay seems to be getting somewhere cosmic here come the gooey keyboards and fluttery flutes, which threaten to turn a potentially explosive experience into sounding like a night in the cocktail lounge of Chilliwack Rainbow Motor Inn.

This was my late brother’s warped idea of music ladies would dig, in that it fulfilled the freak-out criteria he demanded whilst also demonstrating a degree of apparent sophistication. Any Chilliwack chicks drunk enough to find themselves lured back to his cabin would inevitably be subjected to this Swedish jazz rock. My guess is they lasted about as far as the piano break in På En Sten before making their excuses and splitting.

Is it any wonder my brother died a virgin? Those bears did him a favour. I blame Kvartetten Som Sprängde but I’d be lying if I didn’t admit that the fifty-something Baconface can now see something in their album that the teenage me, listening under sufferance, never did.

On the longest track, the nine minute Gånglåt Från Valhallavägen, Fred Hellman’s keyboards go into abstract-atmosphere mode to support a lengthy six string workout by Finn Sjöberg, that doubtless comforted my late brother after his would-be dates had fled into the woods.

Also from Scandinavia, is the first in a series of reissues from the Norwegian folk-rock band Folque. Folque’s eponymous 1974 debut Folque – Folque (HiFly Sound HIFLYCD14007) is much stranger than it initially seems.

I’m no expert on European folk music, and neither was my brother, despite his arrogant and dishonest claims to the contrary, but this never sounded Norwegian to me in 1974 and it doesn’t sound Norwegian now. Isn’t this Norwegians trying to sound like the English folk-rock of Fairport Convention and Steeleye Span?

As such, I guess it’s no stranger than middle-class suburban English teens like The Pretty Things and The Rolling Stones trying to sound like delta bluesmen, or indeed the North London rich kids of Fairport trying to sound like 19th century Suffolk farm labourers, but it takes some getting used to.

British Columbia, of course, was populated with the children of Scottish, Irish and even Scandinavian immigrants, and when my brother gathered his motley crew of longhairs late at night in his cabin for sessions, Folque’s first album would often strike strange buried cultural chords with the assembled reprobates.

The stand out track here, the stately Harpa, with Lisa Helljesen’s Sandy-style vocal and Trond Villa’s chiming bell-like lead, is clearly some ancient British ballad translated into Norwegian, and I remember it reducing a blubbering biker to tears, as he recalled his late grandmother singing it unaccompanied in the fifties in whatever poverty-stricken English shit-basket of a town his feckless family fled to Canada from.

Leaving the snowy northlands now we land in sunny 1968 San Francisco for Marvin Gardens – 1968 (High Moon Records HMRCD.05). Marvin Gardens were never officially recorded in their heyday, but my late brother had the recordings that comprise this new collection on reel to reel live and demo tapes in a carboard wallet, on which he had drawn a doodle of biker chic dragging on a substantial nail, while jamming her paws down the front of her pants. Tasteful!

In the wake of The Airplane, The Fish, The Dead, The Grape and Quicksilver, second wavers Marvin Gardens coalesced around the lesbian folk and blues singer and guitarist Carol Duke. Coincidentally, this cache of lost tapes includes a light folk-rock reading of Eric Andersen’s Close The Door Lightly that’s all but indistinguishable from the one of Fairport’s West Coast inflected debut, and is typical of Marvin Garden’s repertoire of emergent standards.

A lengthy live version of Buffy St Marie’s Ananias has that chugs-chugga train-track boogie Charlatans thing going on, but the bolder the band get the more Duke’s coffee house approach seems inappropriate.

There’s only one original in the nineteen tracks here, a favorite of the band’s gay subculture following called Whips And Leathers. This may explain The Gardens’ lack of a breakthrough, despite the obvious talents of its members, and the timeless playfulness of Duke’s toying with the gender-specific narratives of the source materials. (Did I just write that sentence? I could be writing for The Wire! I don’t need this Sounds gig! This music critic thing is messing with my mind. I don’t know who I am any more.)

At my late brother’s late night listening sessions none of the assembled heads really wanted to hear a version of Big Brother and The Holding Co after Janis Joplin had left, but Big Brother & The Holding Company – Be A Brother/How Hard It Is (Retroworld FLOATM6270) proves that dead bastard’s proselytising persistence was not entirely misplaced.

West Coast all-rounder Nick Graventies steps into the producer’s shoes for 1970’s Be A Brother, does his best to fill a gaping Janis-sized vocal hole, and contributes new songs as well as a left-over from his collaboration with Quicksilver Messenger Service (the strident Joseph’s Coat.)

For my money (Canadian dollars, holding their value considerably more convincingly than your flimsy sterling), Gravenites’ six and half minute downer blues Heartache People is as good as anything the Janis era Big Brother laid down.

The second set here 1971’s How Hard It Is, has been pressed onto this single disc first, and with its tracks in the wrong order, despite being listed on the sleeve as being the second half of the program. Luckily I had my brother’s old vinyl to help me figure out what was what. With funky bass-lines and a big horn section the post-Janis Big Brother’s second album sounds like it’s trying hard to convince you everyone is having a great time, but the psychedelic sixties party is winding down and everybody’s heading to the door.

This month we saved the best to last. English blues rock band Steamhammer steamed out of the seaside town of Worthing in 1968 and were one of my late brother’s all-time favorite acts. Steamhammer – Mountains (Esoteric ECLEC 2549) is their third album, from 1970, and is the perfect mid-point between the straight ahead British blues rock of their earlier records, and the more extended progressive riff pile-ups of their final album, 1972’s superb Speech, and it’s all suffused with a kind of fading psychedelic sunshine, the sound of the Notting Hill scene that co-opted them starting to lose its sparkle, I guess.

Henry Lane, for example, starts like a blues then all these Byrdsy cosmic country-rock arpeggios flutter down over it. Walking Down The Road jams unresolved jazzy chords over an unflinching bassline that lodges in the front of your skull. The live Riding On The L&H uses a blues lick as a springboard into a spacey freeform workout.

Most of my late brother’s stash I could live without, as you can doubtless tell from the tone of these columns, but Mountains makes me wish I was ten years older, and had been born British, so I could have been doing that dumb hands-on-hips hippy buttshaking dance to Steamhammer down the front at the Lyceum ballroom London in 1970, instead of sticking straws up frogs’ asshole and blowing them to pieces in Chilliwack creek in dungarees and cardboard baseball cap I got free from the White Spot diner.

That’s me done. If you’re jonesing for a fix before next month I spin this shit weekly on Wednesday nights on Resonance 104.4 fm in London, and you can listen on-line to Baconface’s Global Globules at https://www.baconfacecanada.com/global-globules.