Review: Baconface - The New Face of Comedy (and Bacon) 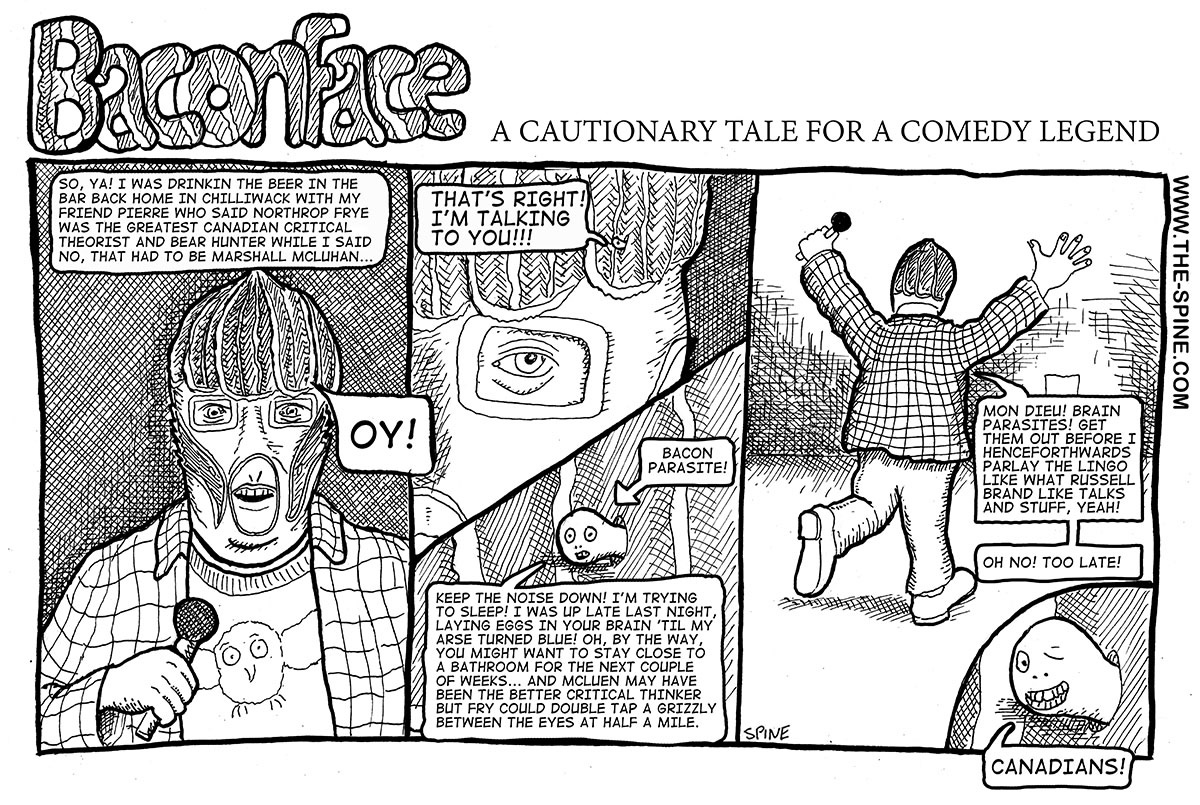 Should pigs die so stand-up comedy can prevail?

That’s the deep moral dilemma that’s been testing me these past few days as the smell of bacon still lingers on my clothes and I feel weirdly complicit in some sick twisted crime for which there is as yet no name.

It’s hard to justify the death of an animal so a man can mask his identity but that’s precisely what’s happening whenever our newest comedy import takes to the stage. The Canadian comedy legend, Baconface, has been playing the Soho Theatre this last week with his show, ‘It’s All Bacon’, and this is my first chance to actually sit down and write the review of what was a truly terrifying hour or so of my life.

As his name implies, Baconface wears bacon on his face and he emerges into the spotlight like some stocky reject from a Texas chainsaw casting call. But he doesn’t wear bacon all over his face. Perhaps sheer laziness prevents him from fashioning a proper mask – a meat helmet, if you will – so what we’re really looking at is a man with a face that is part man and part bacon. It’s really a bacon-human flesh hybrid and should really be advertised as such. ‘Baconmanface’ would be a more appropriate name.

The gaps in the bacon aside, the act itself was as brilliant as it was occasionally incomprehensible to these northern working class ears. Baconface’s thick Canadian accent was often abrasive and sounded like Tom Waits doing a bad impression of Tom Waits were Tom Waits Canadian and suffering from emphysema. I picked up about 80% of what Baconface was saying and since 50% of that comprised punchlines, I laughed perhaps 30% of the time.

Yet there is also something quite humbling about being in the audience for a Baconface show. Remember: this is a man taking a perishable meat product under hot stage lighting every single time he performs. He’s not chosen to use a traditional prop like other comedians. He’s not wearing a fez which might last him twenty years if properly maintained. He’s not grown his hair long like Ross Noble yet neither has he Michael McIntyre’s bouncy fringe dancing playfully like flea-infested dingleberries over a dead sheep’s mutilated arsehole. He’s not even got the youthful good looks of Russell Howard, attractive to both women and aging paedophiles alike. This is just a man with his bacon which is technically pork and, as we know, pork is prohibited in many of the world’s great religions. Culturally, theologically, and morally: this is as cutting edge as stand-up comedy gets.

That’s why we have to admire his commitment to his art. What would it cost to wear six or seven good slices of bacon on your head? Sixteen rashers of Tesco smoked best go for £4, though they’re currently doing a 3 for £10 deal. That’s 48 rashers of quality bacon for £10. Now that expense comes straight out of Baconface’s profits before he’s even taken to the stage and that meat is only going to last him about eight shows. I wouldn’t be surprised if that’s why his runs are so short. He’s just finished playing five nights in London and in August he’s going to do a run of nine nights in Edinburgh but followed by a run that will last thirteen consecutive nights! Will £10 of bacon last that long? My advice: book soon for the early shows before his meat goes off.

Baconface’s stagecraft was rough and not particularly elegant and that brings me to my one criticism of the show. I wouldn’t be surprised if there were parasites living in that bacon. It sincerely hope that Baconface won’t develop trichinosis which is a parasitic infection commonly caught from exposure to uncooked bacon. Indeed, I immediately thought ‘parasitic infection’ when I noticed Baconface’s tendency to scratch himself but I couldn’t tell if that was just stage nerves typical of the one show or a habitual tic. His bacon certainly wasn’t the healthiest I’ve ever seen and, by the end, I was feeling nauseous as the smell of rancid meat drifted off his every punchline.

Indeed, it will be interesting to see how the act develops into the summer months. How well with Baconface’s bacon hold up in warmer venues where his bacon is likely to attract flies? Beneath the bacon he wears what appears to be a modified pair of y-fronts but I’m informed by those in the know that it might be a Mexican wrestler’s mask. Whatever it is: will it provide ample protection against bacon juice seeping through and penetrating his skin? It would be a tragedy is this Canadian legend had to cancel his tour because his face had rotted off from the same virulent worm larvae that affect swine.

His involvement with Stewart Lee’s new TV series is the last enigma and should prove interesting. Baconface might be a comedy legend in his native Canada but over there the humour is less sophisticated and tends to be about overly colourful cardigans, elk, and the etiquette of hunting geese with a crossbow. British audiences require something more subtle than duck call jokes and it’s not entirely clear that Stewart Lee would be the best person to teach Baconface that craft. Baconface deserves to hone his routine with a comedian who has more jokes and fewer emotional, intellectual, and sexual hang-ups about not being Russell Brand. At the moment, Baconface is very much still finding his feet in a new country and he could learn a few tricks from the current generation of comedy talent such as Tim Vine, Miranda Hart, or any of those sexist postmodern Australians that have come over here and are so very funny.